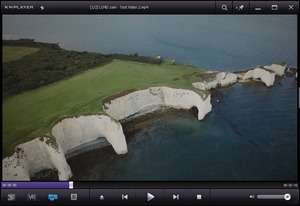 A review of KMPlayer by Tina de Pierre

KMPlayer is a free, lightweight and robust media player with an active community behind it. It currently supports a long list of popular audio and video formats for playback.

As the popularity of open source and free media players grows, KMPlayer is one that stands out as both functional and nice-looking. The reason why KMPlayer has become so popular is because of the bloated nature of some of the normal staples like Windows Media Player and Winamp.

KMPlayer is presented as a minimalist, but feature rich program which makes playing back video files quick and easy. With full support for skinning KMPlayer, you're able to have it looking the way you like without having to deal with the complicated setup of rival VLC player.

Playing back video files in KMPlayer can also be optimized, thanks to the processing tools offered from within the interface. That means you're able to sharpen video output and apply some impressive features to give your videos that ever-so impressive shine. External filters and decoders can also be defined.

One last feature we think mentioning is the video capture tool which is a main feature in KMPlayer; you're able to capture certain parts of the video with the player. Enough said!

KMPlayer is software which can play DVD video.

This download is licensed as freeware for the Windows (32-bit and 64-bit) operating system on a laptop or desktop PC from media players without restrictions. KMPlayer 4.2.2.46 is available to all software users as a free download for Windows 10 PCs but also without a hitch on Windows 7 and Windows 8.

Compatibility with this media player software may vary, but will generally run fine under Microsoft Windows 10, Windows 8, Windows 8.1, Windows 7, Windows Vista and Windows XP on either a 32-bit or 64-bit setup. A separate x64 version may be available from KMPlayer Team.

Ranking in
Media Player Software
#1 of 79